All your chat accounts in just one Firefox OS app

Are you ready for the most awesome unified
chat experience out there? 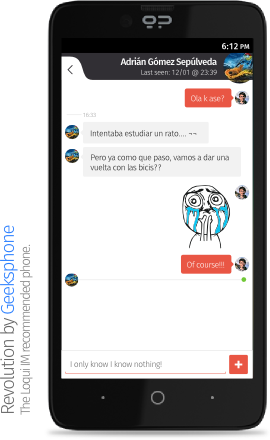 After previous work on porting Loqui IM to Tizen OS 3.0 (tested on the Tizen emulator), we now have Loqui IM (including WhatsApp connectivity) working on a real Samsung Galaxy Watch (which is based on Tizen OS 4.0). N.B. it's all running on the watch itself, no intermediary phone involved.

Contrary to what Mozilla had initially communicated, they have now completely shut down the Marketplace for any updates! Unfortunately, screwed up again by Mozilla.

We are working very hard on implementing the new transport protocol based on Noise Pipes which will be required by the end of the year when WhatsApp discontinues support for older phones like the Nokia S40 platform.

We are still catching up with protocol changes due to enforced end-to-end encryption by WhatsApp. One-to-one messages should mostly be working fine now, but we still can't handle encrypted group messages. On top of that Firefox Marketplace app reviews always take a long time...

We are currently completely redesigning and rebranding Loqui IM for the upcoming 0.3.0 version.

In the last months we have heard a whole lot of unfounded gossips about the arrival of WhatsApp to FirefoxOS. But certainly, until today, the only official statement in this matter was an apparently definitive refusal of its owner company 'WhatsApp Inc.' to port their app to the newborn web-based mobile platform alleging that they "are not sure if the investment worths it".

Now we have decided to include the celebrated messaging service inside the Loqui IM app, adding it to the increasingly extensive list of supported providers (Hangouts, Microsoft Lync, Nokia ovi, Nimbuzz and now WhatsApp).

We know there are other apps that connects to WhatsApp in the Firefox Marketplace, but there's a huge technical difference. Loqui IM connects to WhatsApp servers through TCP sockets and without any kind of intermediary or proxy. WhatsApp can't tell our app from the original one in no way and thus they can't block users who are not connecting from it.

According to our release schedule, the new update will be published in the Firefox Marketplace by the end of November, though the source code will be available some days before through the Loqui repository on GitHub.

This announcement, that coincides with the sixth moth since Loqui was published, was made in the context of an event that took place in the Medialab of the self-managed social center 'La Casa Invisible' in Málaga and was organized in collaboration with the hackers from the nonprofit organization 'BitValley.cc'.

We take the occasion to say in advance that other providers may be supported "quite soon" and we are about to add many other features such as group chat, videocalls using the new WebRTC standard and end-to-end encription with OTR.

Finally we also want to thank every individual who has contributed to the Loqui's early success: from those who have reported or even fixed bugs to those who have translated the app to nine different languages.

What is Loqui IM?

Loqui IM is a mobile messaging app that allows users to use their chat accounts from different providers with just one simple interface.
The app is currently available only on Firefox OS and Android through the Firefox Marketplace, and other operating systems may be supported in the future.

What does the word "loqui" stand for?

The word "loqui" means "to speak" in latin. In addition is a short and easy to remember word.
And yes, it is a term of endearment that young girls use in Spanish as well.

What providers are currently supported?

Loqui IM is a Free, Libre and Open Source project. If you are a developer we encourage you to hack our app and create support for any other protocol, provider or operating system.

Loqui IM source code is available in our Github repository under the terms of the AGPLv3 license.

There are many ways to contribute: translating, sending a patch, testing the latest changes in the repository, filing a new issue or just confirming an issue reported by other user. If you have a problem and you are going to create a new issue, first check if another user have not been reported yet an issue similar to the yours, if not create a new issue.

We have set up a convenient localization platform in http://translate.loqui.im. Please report a new issue at Github or send us an email if you need your language to be added.


If you do not have previous experience with git repositories, we suggest you to read a Basic Git Guide we have written.

Loqui IM is developed by a community of people from all around the world colaborating for free just because we want to create a totally open, libre and neutral messaging app. The role of our sponsor (Waaltcom) is to offer us the needed economical support and the servers and networking infrastructure.

Some of our faces (top contributors)

Need some help? Want to tell us something? Maybe want to join us? Feel free to email us at support@loqui.im (in English). If reporting an issue please provide a detailed description with debug logs.

This software is not supported or endorsed in any way by the service providers it interoperates with. It neither tries to mimic or replace any software originally conceived by those services' owners.

In the same manner, any third party's trademark or intellectual property that may appear in this software must be understood as a strictly illustrative reference to the service provider it represents, and will never be used in any way that may lead to confusion, so no abuse is intended.